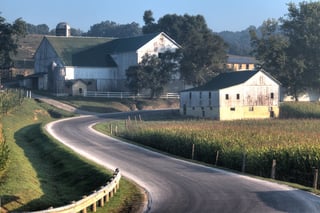 A big draw for locum tenens professionals is the ability to travel, experience new places, and treat people from different walks of life. For many, this means working in big, bustling cities, like New York, LA or Chicago.

But this wasn't what the industry's founding pioneers, Therus Kolff and Alan Kronhaus, had in mind. Locum tenens was actually created to bring physicians to underserved, rural communities.

If the bright lights and fast pace of city life aren't for you, rural locum tenens work offers a quieter alternative with many benefits. Here are three reasons to consider a rural location when choosing your next locum tenens position.

1. The Need is Greater

Where the population is sparse, so are physicians. Compared to urban settings, rural America faces a severe shortage of doctors. According to The Atlantic, “[About] a fifth of Americans live in rural areas, but barely a tenth of physicians practice there.”

Lack of access to care is a dangerous problem for some rural communities and despite attempts to fix it, thousands of physicians are needed to bridge current shortfalls. When you take a rural locum tenens position, you're helping to fill a critical need.

2. You're Part of a Community

Working in a small town means steady work from familiar faces. Rural doctors have described that more exposure results in greater closeness to their patients, plus referrals to entire families and circles of friends. Compared to busier urban settings where you may treat patients only once, rural locum tenens work allows you to interact with patients in a meaningful way and build long-term connections.

3. You Could Make More Money

As we've already noted, rural facilities often have a higher demand for qualified physicians. That can translate into higher salary negotiations than city counterparts. Plus, compared to living in an urban community, you will pay less for transportation, rent and other amenities. If you have student loans or debt to pay off, rural assignments can create saving opportunities and give you a financial boost.

Is a Rural Reprieve in Your Future?
There are a variety of other arguments for rural over urban locum tenens life—like shorter commute times, lower crime rates, and of course, communing with the great outdoors. Ultimately, a career in locum tenens can take you anywhere you want to go. When choosing your next position, remember that rural locum tenens providers make a real difference in their communities.

Founded in 1990, VISTA Staffing Solutions helps hospitals, medical practices, and government agencies in the US optimize their physician staffing, ensure quality and continuity of care for patients, and maintain financial stability. A leading provider of US Locum Tenens and Permanent Physician Search Services, VISTA has 30 years of experience providing award-winning service in the locum tenens industry.